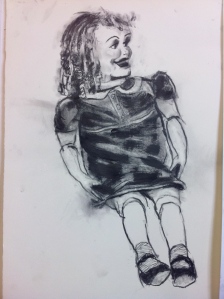 I came across a place called the ‘Centre for Appearance Research’ recently. I was almost ready to choke on my muesli, imagining it was the academic version of the Daily Mail website’s ‘sidebar of shame’ (ie endless ‘pap’ photos of women in the media in various states of undress with appalling ‘judgements’ cast on their myriad appearances and behaviours…). It came up in a Guardian article from last year, about the link of female depression with anxiety about appearance.

The C.A.F. is concerned with how ‘invested people have become in their appearance, how central it is now to the value they place on their themselves’.On further investigation, the C.A.F. is no superficial, commerce-driven ‘think tank’ but a faculty of the University of the West of England that ‘strives to make a real difference to the lives of the many hundreds of thousands of people with appearance-related concerns both in the United Kingdom and across the world’. That is, people with facial disfigurements through birth defects, injuries, burns etc.

It’s moving to look at the case histories and research currently being undertaken there and it presents a sobering counterpoint to the hysterical imperatives from mass media to ‘Remove the visible effects of aging!’ ‘You too can have perfect skin!’ ‘Beyond natural skin matching make-up’ ‘The Eraser perfect and cover foundation’ ‘Face the future with firmer skin’ and the endless ‘fat reducing’ adverts ‘lose Ibs in one week! by obeying 1 rule!’ that scream at me every time I go to email or a social networking site…there may well be an advert at the base of this WordPress post, I do hope it’s a weight loss ‘miracle pill’.

We’re living in an appearance obsessed society for sure – young women particularly are under enormous pressure to resemble the perfected media images we’re all bombarded with everyday.

‘The psychotherapist Susie Orbach, (who, since publishing Fat is a Feminist Issue in 1978 has become a loud and public voice in the conversation about body image) points out that ‘none of us live in a vacuum…simply acknowledging the pressure doesn’t eliminate it’.

‘Look the Doll in the Eye’ is a kind of riposte to all of this – the only answer I have – in a world of artificially perfected images of the idealised female, impossible ideals to attain that achieve only self-loathing and discontent. The discontent that of course fuels our consumer driven society.

The doll symbolises the alienation the girl can feel, the manipulation that she’s subjected to, the objectification of her very self that this wretched state of affairs propagates: There is indeed a mental health condition called the ‘Marionette Syndrome’, for which I substitute the doll: ‘an emotional complex of feelings of powerlessness, emotional rigidity and ego alienation’. My images of the doll/female pretty much embody these conditions. The doll is also, however, the human substitute as perfection, as idol, as simulacrum to be worshiped. More on that in another post. 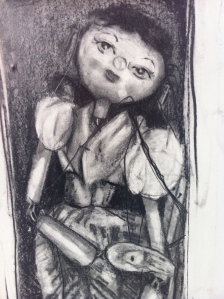